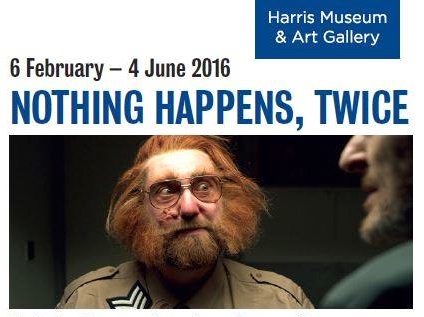 Imagine Neanderthals living in Preston Bus Station and around the city …

This is the inspiration for Nathaniel Mellors’ new film, winner of the Contemporary Art Society Annual Award, premiering at the Harris Museum as part of the exhibition Nothing Happens, Twice. Immerse yourself in film, sculpture and painting, exploring ideas of farce, tragi-comedy and repetition with the Theatre of the Absurd as the starting point. Mellors’ work is presented alongside national and international artists, and six newly commissioned pieces.

Doncaster born international artist Nathaniel Mellors has created his most ambitious film to date for this exhibition, the latest in his Ourhouse series.  The absurdist drama, which was shot in various locations around Preston, features an eccentric family who inhabit Preston’s iconic, brutalist bus station that has a Tardis–like interior subjecting them to a series of fantastical events.

The exhibition takes the Theatre of the Absurd as its starting point, exploring notions of repetition, farce and tragicomedy. The title is taken from Beckett scholar Vivien Mercier’s description of Waiting for Godot, as “a play in which nothing happens, twice”. Beckett, as many of the artists in this exhibition, deconstructs notions of time, using it as a medium to create absurdist, nonsensical scenarios. The works challenge us to search for the meaning of existence by highlighting the absurdity of the human condition through our relationships to each other, the metaphysical, and the natural world.

A resource area and family activities are also available in the gallery.

Nothing Happens, Twice: Artists Explore the Absurdity of Life