George Hallett: Portraits from Exile, the non-selling exhibition curated by Christine Eyene and facilitated by Ayo Adeyinka, coincides with Bonhams’s South African sale on 27 October, and includes portraits of Gerard Sekoto and Dumile Feni (whose works are included in the upcoming auction), Louis Maqhubela and Gavin Jantjes among other artists, taken in the 1970s and 80s. The photographic exhibition also includes portraits of some of the artists who visited their exiled peers in the UK and France, like James Matthews and Peter Clarke. As a creative photographer, Hallett also involved other exiles in his work, notably for the covers of the pioneering Heinemann’s African Writers Series edited by James Currey, which are now collectors’ items. Journalist and activist Lorna de Smidt, former South African Culture Minister Pallo Jordan, jazz musician Louis Moholo, posed for Hallett’s photographic compositions.

George Hallett: Portraits from Exile offers a glimpse of a huge collection of portraits of South African historical figures. It is an insight into an invaluable privately owned visual archive that has yet to be explored and catalogued. In his essay on the development of urban art, South African art historian Steven Sack writes that “many of the most talented of the black artists have either died young and tragic deaths or have chosen to live in exile.”* Exile is indeed the route taken by two pioneers of South African modern art: Ernest Mancoba and Gerard Sekoto. Theirs were the path followed by numerous South African artists opposing the apartheid regime or simply seeking to engage with the art world beyond the colour bar.

Among these was George Hallett (b. 1942, Cape Town), a young self-taught photographer who began his career by freelancing for Drum Magazine in 1964 with editor Jacky Heyns. Encouraged by poet James Matthews and artist Peter Clarke, Hallett set out to document District Six before this area was destroyed following the implementation of the Group Areas Act in 1966. After completing this first body of work (1968-69), he embarked on a fourteen-day journey aboard the Achille Lauro to Southampton for what was the beginning of a twenty-four year exile, from 1970 to 1994, in England, France and Holland. London was George Hallett’s first port of call. There he joined a growing community of exiles. Convinced of the importance to document this chapter of South Africa’s history, he began an impressive series consisting of portraits of visual artists, musicians, writers, activists, with whom he shared both a cultural bond and a common experience of estrangement.

Giles Peppiatt, Head of South African Art at Bonhams, comments: “The images portray the pioneers of black South African art in the Twentieth Century; the works give us a rare glance into the character of artists who chose an uncertain exile in place of subjugation in the face of a hostile apartheid regime.”

*Steven Sack, ‘From Country to City: The Development of an Urban Art’, in David Hammond-Tooke and Anitra Nettleton (eds.), ‘Catalogue: Ten Years of Collecting (1979-1989)’. Johannesburg: University of the Witwatersrand Art Galleries, 1989, p. 54.

For further press information please contact Julian Roup on 0207 468 8259 or julian.roup@bonhams.com or press@bonhams.com 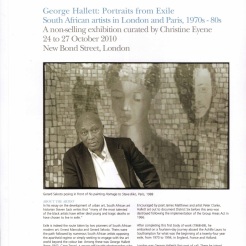 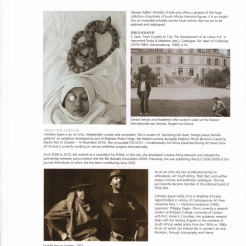 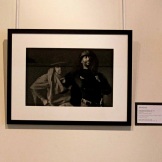 Two portraits of Dumile Feni in London in the 1970s and in his New York studio in the 1980s. 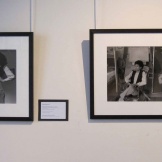 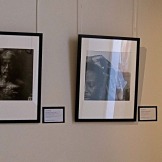 Sekoto’s Homage to Steve Biko flanked by two of Hallett’s pictures of the painter.