Review: Feminist Avant-Garde of the 1970s

The Photographers’ Gallery is currently hosting Feminist Avant-Garde of the 1970s. Works from the SAMMLUNG VERBUND, Vienna. Curated by Gabriele Schor, this exhibition is a selection from a collection inaugurated in 2004 that has been shown in numerous international venues including BOZAR, Brussels, as part of the Summer of Photography 2014. Then titled WOMAN: The Feminist Avant-Garde of the 1970s, Schor’s exhibition set the tone of the 2014 Belgian photography biennial to which I was also invited to propose an exhibition as part of BOZAR Africa programme in an attempt to broaden the scope of feminist artistic discourses.
I developed an exhibition called WHERE WE’RE AT! Other Voices on Gender informed by the history of Black British women artists, black feminism. It also drew from previous editorial projects and exhibitions with African women artists, as well as the archive held at the University of Central Lancashire as part of the Making Histories Visible project led by Professor Lubaina Himid, an artist and curator who has been instrumental in the visibility of Black British women artists since the 1980s.

One of the particularities of WOMAN – besides the fact that it brought together major feminist artists, seminal figures that undoubtedly changed the course of women’s, and generally speaking, 20th century and contemporary art history – is that it adopted a very Eurocentric viewpoint. This called for a response from other places and cultures in which feminist discourses had also been active in that very decade.
The exhibition I put together and the accompanying catalogue provided enough material for any visitor, amateur, specialist, art critic, historian, curator or collector to get a sense that there was more to the 1970s “feminist avant-garde” – a term coined by Gabriele Schor – than the western narrative.

The London showcase is a great opportunity to be exposed to a selection from this historical collection with, one would assume, a broader understanding of the 1970s feminist art. As anticipated, with over 200 works by 48 artists, the exhibition does not fail to meet the expectations of art lovers and those interested in feminism.
However, once again, the discourse remains predominantly Eurocentric with a focus on art targeting “patriarchy and sexism”, addressing “the politicisation of domestic and public space, the canonisation of ‘male’ art history, feminine identities, gender roles and sexual politics”.

The exhibition is loosely arranged in four chapters, the wall text reads: ‘The Seductive Body’, ‘Domestic Agenda’, ‘In My Skin’ and ‘Alter Ego’. References to non-western or non-white experiences are brushed upon in the ‘In My Skin’ section through a documentation of one of Lorraine O’Grady’s Mlle Bourgeoise Noire (1980-83) performances as an example of the “complex intersection of power, gender and racial identities”.

There is also a mention of non-western women in the timeline put together by Daniela Hahn, Assistant Curator at the SAMMLUNG VERBUND, Vienna, placed in the gallery’s staircase.
The overlooking of the contributions by other feminist artists, in an exhibition shown in Britain, a place that bears a legacy of “the activism and struggles of black women migrants from the postcolonial Caribbean, Africa and the Indian sub-continent”[1], is something that cannot remain undebated. Therefore it seems relevant to share some of the thoughts on which I pondered in my 2014 essay.

Having been dealing with issues relating to exhibition display and the politics of space within art institutions, I found myself reflecting on the content and differences between a Eurocentric exhibition and non-White counter-discourses. At the same time, the Hayward Gallery was presenting Ana Mendieta: Traces curated by Stephanie Rosenthal. It is through the work of Mendieta that I was able to articulate the insidious racial undertones of an all-White (safe for one or two exceptions) feminist art exhibition.

The first rooms of the Hayward exhibition contained works that clearly indicated Mendieta’s affinity with African cultures. The use of ox blood in her Rape series (1973), her blood-drenched tableaux raising awareness about violence against women, drew from the Afro-Cuban spiritual practice of Santería[2]. In the statement of her exhibition at Corroboree: Gallery of New Concepts, University of Iowa (1977), she acknowledged that Spanish and African cultures formed part of Cuba’s heritage. She went on to declare her fascination for “primitive art and culture” and added that, “it is this sense of magic, knowledge and power, found in primitive art, that has influenced my personal attitude to art-making.”[3] Her Silueta and Fetish series (1970s), her reference to rites and initiations, and exploration of the legend of the Black Venus (1981) translated these Afro-cultural links.

Mendieta clearly identified with women from the South. This became evident during her involvement with the A.I.R. feminist collective, beginning in 1978. In her contribution to the catalogue of Ana Mendieta: Traces, art historian Julia Bryan-Wilson’s explains that:

As she immersed herself in activist circles, Mendieta became dissatisfied with the A.I.R. collective and sought connections elsewhere, including within the Cuban exile community and within Third World feminist organizations. Though the Heresies collective had published an issue on ‘Third World Women’, Mendieta realised how deeply ingrained racism was within white US feminism. In this she was not alone; panellists at the Soho 20 Gallery in 1978 on ‘Third-World Women Artists’ – including [Howardena] Pindell, Faith Ringgold and Tomai Arai – discussed how ‘individual encounters with the feminist movement had been keenly disappointing. Most of them had found white feminists incapable of comprehending the peculiar plight of non-white women – either because they were partners in the oppression or because they were too preoccupied with their own priorities to deal meaningfully with those of others’.

Mendieta began to disidentify with the feminism practiced by the white majority of members in A.I.R.; in her curatorial introduction to an exhibition called the Dialectics of Isolation: An exhibition of Third World Women Artists of the United States, she wrote: ‘American feminism as it stands is basically a white middle-class movement. This exhibition points not necessarily to the injustice or incapacity of a society that has not been willing to include us, but more toward a personal will to continue being “other”.’[4]

This passage, quoted at length, clearly indicates two points. First of all, as has been demonstrated by many non-white feminist activists and thinkers, the non-inclusivity of 1970s western feminism means that it cannot be considered as representative of all women’s struggles of that decade. Secondly, the account of Mendieta’s interaction with Latin- and African-American feminist artists is a lead that could have been explored to de-essentialise this hegemonic view of feminism.

A review of the Dialectics of Isolation written by critic Carrie Rickey for The Village Voice singles out the work of Judith Baca, Janet Henry and Howardena Pindell, a “well known painter and collagist [who] offers a video tape in which she looses her anger at the racism of white feminists.”[5]
Although Mendieta’s exhibition is dated 1980, it featured work by artists who had been active since the 1970s. Therefore there is no reason to discount those artists.
The underrepresentation of non-white women in American feminism and feminist art is something Mendieta was acutely aware of. Of her involvement with A.I.R., her sister Raquel Mendieta stated that Ana “joined A.I.R. primarily because she failed to find commercial gallery representation in New York.”[6] Likewise, Coco Fusco mentioned that quite a number of Mendieta’s colleagues remember “her struggles to gain recognition”.[7]

The case of African-American women artists is one example of how non-white women took matters into their own hands. In her article on “The Emergence of Black Woman Artists”, Kay Brown recalls that in the 1970s, black women artists were generally excluded from major gallery and museum exhibition, and only received marginalised representation in major shows. In 1971, Brown met with a number of women artists including Dindga McCannon, Faith Ringgold, Carol Blank and Pat Davis to discuss plans for a major exhibition of black women artists. The show was held at the Acts of Art gallery in Greenwich Village and was entitled “Where we at” Black Women Artists: 1971. Brown goes on to write that:

The exhibition was unprecedented in that location, not only because of the race and gender of the participating artists but also because of the opportunity it gave them to demonstrate their originality, high artistic skills, and interpretations of the relevant themes of the Black Arts movement.[8] 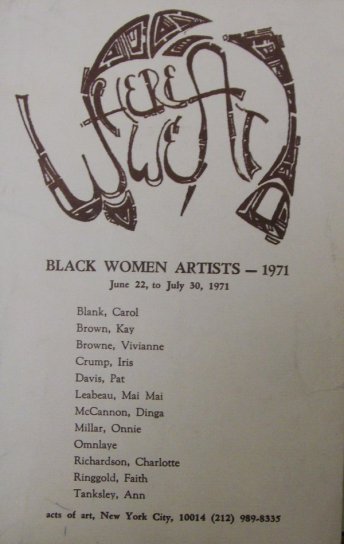 That same year, building on the success of the exhibition, the artists decided to form a collective called “Where We At” Black Women Artists Inc. (WWA). This became a fully structured organisation, electing members, holding meetings, organising exhibitions and devising actions that were relevant to the black community: neighborhood programs for children, workshops with women and men prison inmates and so forth. Brown’s appraisal of the WWA relation to the feminist movement is quite insightful:

Interestingly enough, during this same period the women’s liberation movement, basically headed by liberal white women, made its debut. Although some believe that gains made by black women artists resulted from the influence of the feminist artists, in my opinion this is not so. Although the WWA members and other black women artists all agreed that women should empower themselves to gain economic and artistic equality, they generally viewed themselves as integral to the Black Arts movement and saw their struggle as primarily one against “racial discrimination”.[9]

Incidentally, Kay Brown and Faith Ringgold are also two of the women included in the frieze of portraits framing one of the works that open The Photographers’ Gallery display, Mary Beth Edelson’s Some Living American Women Artists / Last Supper (1972).

Mendieta’s presence in Feminist Avant-Garde of the 1970s does not make it a more racially inclusive project. The examination of her practice, just like that of O’Grady’s, and the furtive appearance of Brown and Ringgold, should raise questions about these other voices. Or rather, more justly, about their silencing. Instead, as Jane Blocker comments on Ana Mendieta’s relocation in the ranks of hegemonic discourse: “it is difficult not to read this dis-location as a ‘whitening’ of [her] image”, “as a way of purifying it from its roots in African and indigenous cultures.”[10]

The 1970s feminist art in this exhibition is almost presented as a polished one white woman’s voice, devoid of its own contradictions, of its internal struggles, erasing racial experiences, relegating the notion of intersectionality to an empty rhetoric.
One can perfectly understand that building a collection is a matter of personal or curatorial choice. It is a subjective take on the vastness of art productions. However to hold one racial group as representative of feminist art, in any art historical period, is rather problematic. Equally disturbing is the fact that The Photographers’ Gallery has not deemed relevant to address this matter. As if it was a non-issue, an established fact, set in stone, a Gospel truth on feminist art that cannot, or should not, be disputed.
One can only hope that other London venues, especially those that have vowed to place women’s art at the forefront of their programming, will not make the same mistake and allow room for artistic and curatorial dialogues that acknowledge art historical facts instead of blanking out some of its important chapters.

Feminist Avant-Garde of the 1970s
Until 15 January 2017
The Photographers’ Gallery, London

[2] Santería is a syncretic religion combining West African, Caribbean, Amerindian and Roman Catholic beliefs. It emerged in Cuba in the 19th century with the arrival of Yoruba-speaking Africans (from regions of today’s Nigeria) as a result of the transatlantic trade.